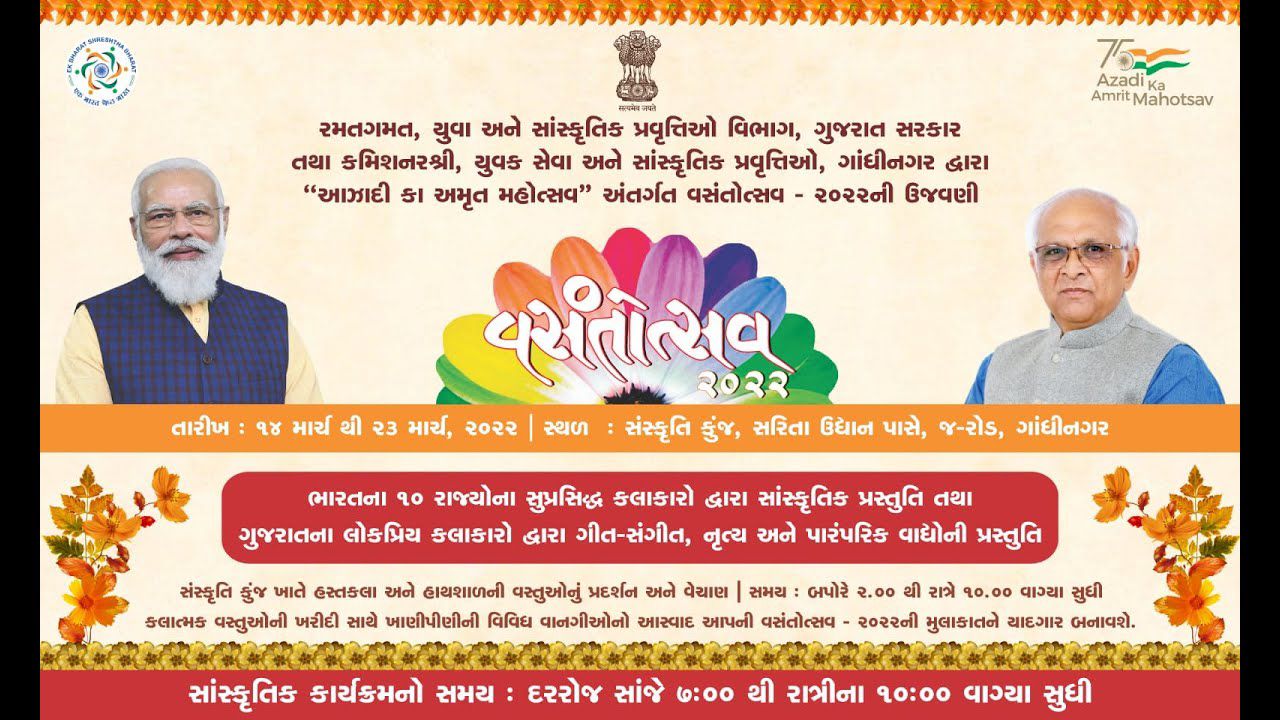 Vasantotsav presents our traditional and forgotten folk dances. Among the cultural performances performed daily are Ganesh Vandana by the famous dancer Ms. Rucha Bhatt, Raj Bokharia of Porbandar and his troupe by Mer Ras, Shri Rajendrabhai Raval by Kervana costume, Surat’s Saptadhvani Kalavrund by Prachin Garbo, Haryana, Rajasthan, Jashmir, Regional dances by folk artists from Chhattisgarh, sword dances by tribal groups from Dahod, and chilli dances by folk artists from Patan will be performed. While in the program of folk music to be presented by well-known artists of Gujarat, folk songs will be performed by famous folk singer Shri Jignesh Kaviraj.
Like every year at Sanskriti Kunj, this year also the stalls set up in the style of Desi Hat will display and sell the handicrafts made by the artisans. Will also be able to enjoy the taste.
8 day cultural festival, Vasantotsav, was inaugurated at Gandhinagar in Gujarat. The dance forms of Chhattisgarh were highlighted as it’s the sister state of Gujarat.
About the Festival:
The Vasantotsav is an 8 day cultural fair held at Gandhinagar in Gujarat. It is celebrated as the state’s spring festival in February. It is also called the ‘Sanskruti Kunj Fair’ (‘Sanskruti’ meaning culture and ‘Kunj’ meaning hub). It is to highlight the diversity of the country’s heritage.
Theme of the Festival:
The 2020 Vasantotsav is being celebrated on the theme of ‘Ek Bharat Shrestha Bharat’. Under the Ek Bharat Shrestha Bharat initiative, Gujarat is paired with Chhattisgarh as sister states. Hence, the festival started with a performances from Chhattisgarh.
Important Link
Vasantotsav Programme Live
Panthi Dance:
Panthi Dance is a folk dance of Chhattisgarh, it is mainly performed by the Satnami tribe of Chhattisgarh. It is a religiously significant dance performed during the Maghi Purnima (birth anniversary of Guru Baba Ghasidas). It is usually performed by male dancers and uses musical instruments like mridanga and jhanjh.